Cape Town, South Africa – December 9, 2017 – Vans South Africa has partnered up with The Shred to make Cape Town’s first high performance public skate bowl a reality. Built by CA Skateparks Africa, a local park design and construction crew with years of experience in creating top quality skateparks around the world. The custom-made precision concrete skate bowl is one of a kind on the continent.

Today’s Skate Open Day allowed skateboarders of all ages and abilities to come and check out the bowl, and ride it for the first time. A series of jam sessions were held throughout the day, encouraging maximum participation from the skate community. Vans also flew in their skate ambassadors from around the country to be a part of the special day, ensuring that the ‘best of the best’ local bowl riders were there to experience the bowl firsthand. ‘Best trick’ challenges set in various parts of the bowl drove the skateboarders to their limits. Red Bull provided cash prizes to those who performed the best tricks in each jam, as incentive for skateboarders to push themselves and put on a good show for everybody in attendance.

Globally, the Vans Park Series (VPS) attracts hundreds of riders from across the world to compete in ranked events. Competitions are held in some of the world’s best skateparks, including Pro Tour stops in places such as São Paulo, Brazil; Malmö, Sweden; Sydney, Australia and Vancouver, Canada. There has been an interest in Africa joining the tour, but up until now no adequate facilities have existed on the continent. Vans South Africa has invested in this new facility to give local skateboarders a platform to develop their skills and hopefully represent the continent on the world stage, in the near future. Skateboarding has seen continuous growth in South Africa over recent years, despite a lack of quality skate facilities and little infrastructure development. However, with a long-term commitment to developing the skate scene and by backing it up with considerable investment in a facility such as this, Vans is leading the way in supporting the growth of skateboarding in South Africa. The new bowl is open to the public on a daily basis, during standard operating hours at The Shred skatepark. For more information about the facility or launch event, or for high resolution images, please contact Warren Talbot - warren.talbot@vansza.co.za / +27820891510

About The Shred Skatepark

The Shred is a privately owned indoor skatepark situated at 68 Auckland Street, Paarden Eiland, Cape Town. The park operates as a business and is open to the public for skate sessions. 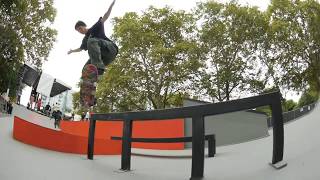 Made In America Festival 2018